Toulouse (in Occitan Tolosa) is a town in the southwest of France, capital of Haute-Garonne and Occitanie since the territorial reform of 2014, bringing together the former Languedoc-Roussillon and Midi-Pyrénées regions. It is also renowned for being one of the French capitals of rugby and violet, from which candy and liqueurs are produced.

Toulouse is a town in the southwest of France, capital of the Occitanie region and prefecture of Haute-Garonne, halfway between the Atlantic Ocean and the Mediterranean Sea.

It is the fourth largest French town in terms of population, after Paris, Marseille and Lyon. It is also the largest European city specializing in aeronautics and space, with companies such as Airbus, EADS Astrium, Thales Aliena Space, CNES, Safran, etc.

Finally, there are also numerous charter flights departing or arriving from Toulouse-Blagnac.

The A621 motorway provides access to the airport via exit 3 in about 10 minutes (if the traffic is moving freely).

The main road 124 and the department 902 also provide access to the terminal.

Finally, since 11 April 2015, the T2 tram line links the airport to the city center for the same price as the bus.

You can get to Toulouse directly, without changing trains from the following major cities:

There are also many regional trains (TER) that converge towards Toulouse.

The station can be reached on foot in about 15 minutes from the city center or by taking line A (Basso Cambo - Balma Gramont); stop Marengo-SNCF) of the Toulouse metro station Tisséo.

However, beware of traffic and parking problems in the center of town and the Toulouse agglomeration.

Finally, there are buses to and from Spain, Portugal and Morocco. Otherwise, most bus services to and from Toulouse are on a regional scale.

The bus station is next to Toulouse Matabiau Train Station.

The rates for all trips by bus (excluding airport shuttle), metro and tram are fixed by the following grid (January 2013):

There are Tourist Pass giving due to unlimited access to the public transport network and reduced rates in some museums, monuments, shows, shops ... They are available at the Tisseo agencies and at the Tourist Office:

WARNING: You are asked to make an extra payment if you buy a ticket on the bus, because the drivers do not always return the change. In addition, only one way is available on buses. For subscriptions, you must get them from the automatic cash machines, present in all the metro stations (payment by blue card or currency) or at one of the Tisseo agencies.

It is better not to try to defraud, guards often guard near the turnstiles. Moreover, the staff of the supervisors have been expanded to "fight" fraud. And when it comes to cheating on the bus, the driver will, if necessary, call controllers and the prevention team, both of you, will not have a lot of soul...

Many checks are carried out at Jean Jaurès station, the most important station on the network, as this is where the two metro lines of Toulouse (A and B) are cut off. Controllers are often accompanied by police officers.

Line A is a north-east/south-west axis that serves Balma-Gramont, Argoulets, the Matabiau neighborhood including the SNCF station, the Allées Jean-Jaurès (line B), the Capitole, Esquirol, the Arenas (line C and Tramway), Bellefontaine and Le Mirail (Fac de Lettres, de Langues, d'Art et d'histoire).

Line B is a north-south axis that serves the districts of Borderouge, Barrière de Paris, Compans-Cafarelli (congress center and departmental council), Arnaud-Bernard, Jean-Jaurès (line A), Carmes (covered market), Saint-Michel (Palais de Justice, Muséum, jardin des plants), Empalot (access to Stadium and Parc des Expos), from Rangueil to Ramonville. Each station on line B is decorated with a contemporary work of art. Some are easy to see, others much less.

It is a suburban line provided in partnership with TER Occitanie. It serves the Arena (line A and Tram), Colomiers.

It starts from {{w|Palais de Justice (Toulouse metro)|Palais de Justice) (line B connection) through the Arenas (line A and C connection) and leads to Blagnac (but not the airport) via the Zénith, Purpan Hospital, the center of Blagnac, Odyssud, IUT de Blagnac, all the way to the Andromeda-Arena neighborhood eroconstellation (Airbus A380 factories and future exhibition grounds).

Commissioned since 11 April 2015, it is on one side the extension of the T1 line to the center of Toulouse, connecting the Palais de Justice (line B) to the Arenas (line A and C) via the Croix de pierre and on another it leads to the station of the Toulouse-Blagnac Airport.

More than 50 lines serve the perimeter of the 104 municipalities of the TCMS (Syndicat Mixte des Transports en Commun). Be aware that some bus lines are still not connected to lines A or B of the metro. In addition, some lines do not work every day (e.g. Sundays and public holidays).

Lines, schedules and plans are available at: http://www.tisseo-urbain.fr/horaires/.

Toulouse by car can be a CHILD at certain times.

The city center can be visited on foot; everything is in a small perimeter. The car is absolutely to be avoided because of parking and traffic problems. Several parking lots are available around the center. More and more streets are now reserved for pedestrians and cyclists.

There are many free parking lots at the end of the metro and tram lines and provide easy access to the city center. Remember to keep your transport tickets so that you can get out of these car parks.

Many Toulouse people already own their bicycles.

More and more bike lanes are being built in the city, but the Toulouse people have a hard time giving up their car. You should know that Toulouse driving (except for the exception) is really not courteous and the saturation of the streets does not make things any better. It is not uncommon to find stopped cars or even parking on bicycle paths. It is also not uncommon to run into grumpy drivers who will honk you if you are in front of them in the very narrow streets. Avoid taking the pavements as much as possible, as it is often dangerous to share such a small space with pedestrians, who are often not very attentive to bicycles. Not so much for you (though) but more for pedestrians that you might accidentally push.

Having said that, cycling is still the best way to get around Toulouse, free if you already have it or have it lent to you, faster than the car given the saturation of the streets and, whatever one may say, faster than the metro and buses that are hampered by traffic.

French is the language most used by locals: it is understood by the general population and is the only employee of the government.

A vernacular language of much of the south of France, Occitan is inseparable from Toulouse's identity. It is present in two dialectal forms (languedocien and gascon) that are explained by the geographical location of the city, at the border of Languedoc and Gascony. If this language is no longer the predominant language in everyday life, there has been a symbolic resurgence since the 1970s of attachment to the roots (real or symbolic, or felt as such) that include a renewal of the Occitan language. This renewal is reflected in the development of bilingual signage (street names, road signs), the emergence of Occitan-language radios, and the creation of schools providing Occitan-language education.

In addition, the inhabitants of the Midi-Pyrénées region interviewed on the official website as to their name have mostly designated themselves as Occitans.

Many Toulouse expressions, from Occitan, are found in the regional French of much of the south of France.

The main monuments of Toulouse

Toulouse offers a wide variety of covered markets (markets) or not. The markets are open every day except Monday (except for Saint Aubin, which only works on Sunday).

It is a city of relaxation par excellence. It is said that it is Spain that grows its horn a little (Claude Nougaro), and for good reason, the country is Mediterranean: quiet.

Toulouse is the European hub for aerospace and space.

Due to the proximity of the Airbus factories in Blagnac, it is not uncommon to see A380s or Beluga in the landing or take-off phase, just by looking up.

Drink a drink / Go out

For non-fans of drinking in the stadium atmosphere, there are other nice places in the center of Toulouse. Be curious to explore the banks of Garonne both day and night, if you are lucky, a small improvised evening is organized...

Most of the pubs in Toulouse offer quizzes usually bilingual French-English.

Having been the birthplace of Carlos Gardel Toulouse is strongly linked to the Argentinian tango, probably one of the most active cities in France after Paris, the city offers the possibility to dance the Argentinian tango every evening. Do not miss "Tangueando: La Maison du Tango" a must-see and unique place in France dedicated exclusively to Tango and Latin American culture.

Along the banks of the Canal du Midi, not far from the Halle aux Grains. At the ''Puerto Habana'', it is possible to dance the salsa for free almost every night of the week. A must-see salsa venue in Toulouse, this is where you can come across the best salsero in Toulouse. 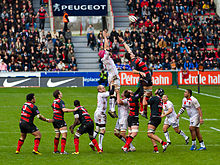 With 20 French championship titles and 4 European Cups, Stade Toulousain is one of the main European rugby union clubs and is one of the symbols of the city. Matches are regularly held at the weekend at the Ernest-Wallon stadium (free shuttle on match days from the Barrière de Paris metro station, line B) or at the municipal stadium (free shuttle on match days from the Esquirol metro station, line A; or 10 minutes on foot from the stations "Empalot" and "Saint-Michel", line B). The matches are also broadcast in many bars.

The aviation industry offers many opportunities. The future Canceropole located on the AZF site will be a source of employment.

Toulouse and its suburbs have several important commercial areas:

Toulouse is in the heart of southwest France, renowned for its gastronomy. Foie gras, duck breast, Cassoulet... And especially its Toulouse sausage, nothing to do with a chipolata. It sometimes shares the visual, but the taste is more peppery and its flesh is pink. Grilled with a wood fire, it offers a quintessence of the type incomparable.

In the heart of the southwest, Toulouse occupies a strategic position near Gascogne. The city's restaurants therefore serve many duck specialties (preferably foie gras). The most famous dish, however, is probably the cassoulet, made with Toulouse sausage and white beans, fueling an ancestral quarrel between the supporters of the Castelnaudary cassoulet against those of the Toulouse cassoulet on its origins and to divide them in a taste-like quality. Note also the Cachou Lajaunie.

There are restaurants between Place du Capitole and Place Esquirol, behind Place Wilson (around Victor Hugo) and between the Daurade and Place Saint Pierre (Rue des Blanchers is a must!). At lunchtime, do not miss out on eating in the restaurants on the first floor of the Victor Hugo's market: IM-BAT-TABLE value for money.

No major insecurity for a large French city, just avoid the Arnaud Bernard neighborhood and especially the Reynerie district at nightfall (Bellefontaine, Le Mirail and Les Izards/Trois Cocus are to be avoided). Therefore, just avoid the dark and poorly lit places near the periphery.

Otherwise, in Toulouse, there is a strong comradeship due to the 120,000 students present, it was customary - a unique case in France - that the bars of the city center be open until 5 am in the morning (without curfew), however since September 2011, by an order of the mayor and the municipality, the bars of Toulouse is open until 2a.m. at the latest, due to several drinking problems and repeated incivilities in the city.